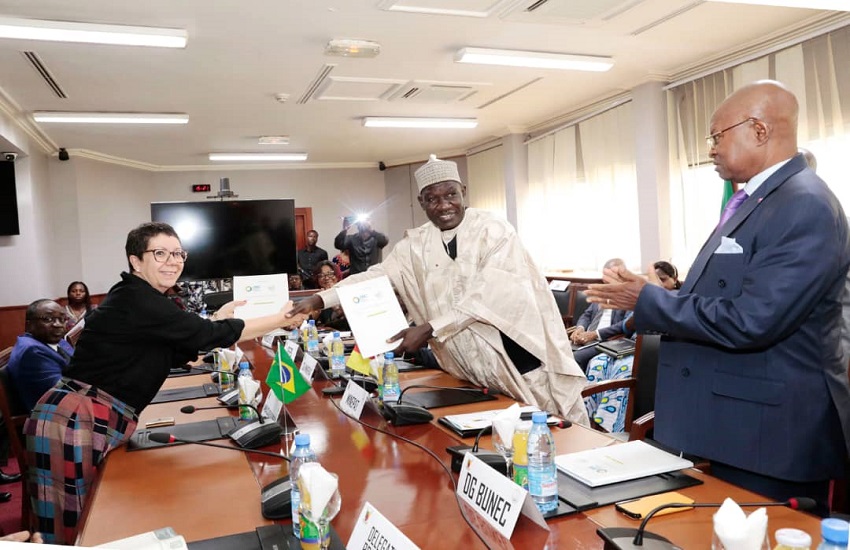 The Minister of the Economy, Planning and Regional Development Alamine Ousmane Mey and the New Ambassador of the Federative Republic of Brazil, Her Excellency Madame Patricia Maria Olivera de Lima signed on August 25th 2022 in Yaounde, a grant agreement to the tune of 1.683 billion FCFA for the support project for the improvement of the National Civil Status System of Cameroon.

With this grant from Brazil, the Government, through the National Civil Status Registration Office, intends to fully implement the Strategic Plan for the Rehabilitation of Cameroon’s civil status and also pursue the implementation of the Master Plan for the computerization of the national civil status system.
Speaking at the signing ceremony, Minister Alamine Ousmane Mey underscored that with the expertise and support of Brazil that has attained 99% success in its National Civil Status System performance , Cameroon will address several problems at the civil status centers amongst which are; the low rate of declaration of births and deaths and the insufficiency of control of the centers which caused the development of documentary fraud. The insufficient measures to ensure better integration of civil registration with other sectors and the absence of a computerized, secure and integrated civil status system will equally be resolved.
The Minister also explained that this action is in line with Cameroons National Development Strategy NDS30 in which the second pillar is to make the development of human capital and well-being a priority.
On her part, Her Excellency Madame Patricia Maria Olivera de Lima expressed profound joy at having to be present at the event and hopes that Brazil could help people in Cameroon with no registration to be enrolled and come to education, social and health benefits.
The Brazilian part contributes with a donation of 1.46 billion FCFA through the Brazilian Cooperation Agency (ABC), the Federal University of South BAHIA (UFSB) and the Association of Notaries and Registrars of Brazil (ANOREG).The Cameroonian part through the counterpart funds and the non-financial contribution of National Civil Status Registration Office (BUNEC) contributes up to 200,660,350 FCFA.

Speech by MINEPAT Agreement with Brazil