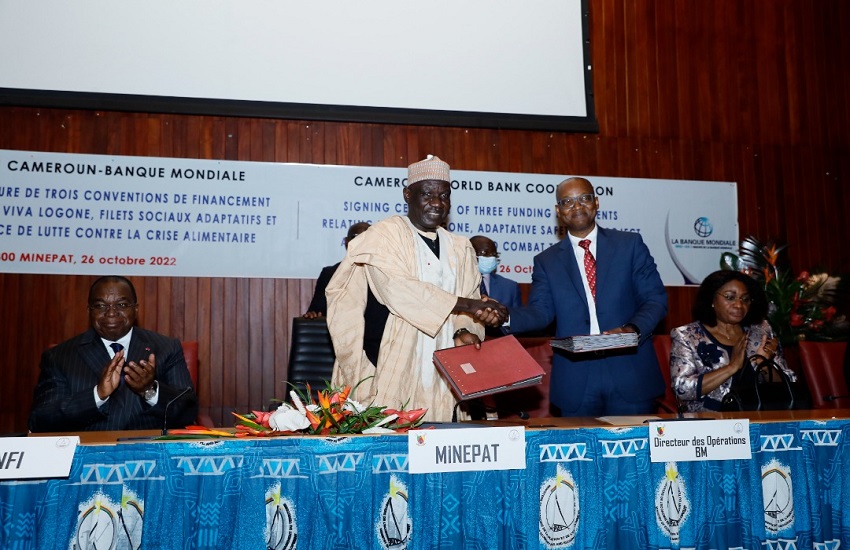 Three conventions have been signed by the Minister of the Economy, Planning and Regional Development Alamine Ousmane Mey and the Country Director for the World Bank in Cameroon, Abdoulaye Seck. The ceremony took place on October 26 at the MINEPATs Cabinet in Yaounde.

In his address at the signing ceremony, Minister Alamine Ousmane Mey detailed that these agreements are to finance; The Logone Valley development and investment development project dupped (VIVA LOGONE) for an amount of 113,4 Billion Francs CFA, the Emergency project to fight the food crisis dumped (PULCCA) for an amount of 59,17 Billion CFA francs and the financing of the Adaptive Social Net Project and Economic Inclusion for an amount of 92,8 Billion CFA francs. The three projects represent 310 billion CFA francs. According to the Country Director for the World Bank in Cameroon, Abdoulaye Seck  PULCCA has two objectives which are to, contribute to mitigating the short-term impacts of food and nutrition insecurity in the targeted area and strengthen the economic resilience of households and agricultural producers to climate shocks. It is hoped that PULCCA should make it possible to increase from 20 to more than 60 percent the proportion of households, in the target areas, with food and nutritional consumption considered acceptable. On its part, VIVA LOGONE will directly benefit approximately 30,000 families and indirectly more than 200,000 families and will promote double cropping each year and thereby allow the consolidation of a robust private sector.

The World Bank Boss in Cameroon also said  that the Adaptive Social Net Project and Economic Inclusion project, seeks to extend social coverage and the ability to respond to shocks for poor households, increase access to opportunities for income generation and support for entrepreneurship for young people in urban areas.

Minister Alamine Ousmane Mey hailed the fact that with the signing of these three conventions, the portfolio of projects financed by the World Bank is at 20 projects and the total amount is 1789 Billion CFA francs. He asked the Cameroons World Bank Country Director Abdoulaye Seck to transmit with fidelity to the highest leaders of the bank, the immense gratitude of the Cameroonian people with in the first place The Head of State and his government for the precious contributions of the World Bank Group to the development efforts of Cameroon