Cameroon-GreatBritain cooperation; The Minister of the Economy receives The British High Commissioner to Cameroon. 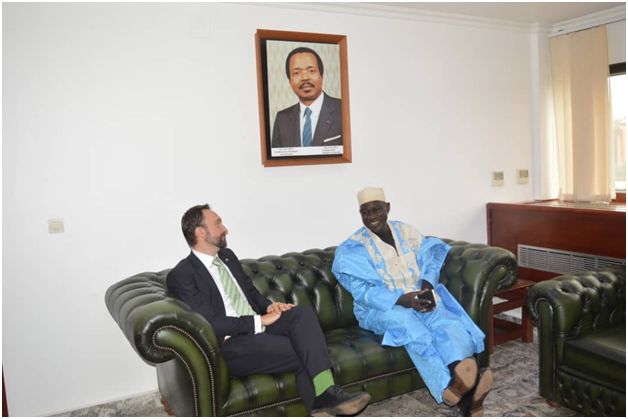 Cameroon-GreatBritain cooperation; The Minister of the Economy receives The British High Commissioner to Cameroon.

The Minister of the Economy, Planning and Regional Development Alamine Ousman Mey today 30, September, received the British High Commissioner to Cameroon Rowan Laxton at his Ministerial Cabinet in Yaounde.

The Audience was an opportunity for the British High Commissioner to Cameroon, to appreciate and revise the cooperation ties between Cameroon and Great Britain, and update him on the recent appointments of some key dignitaries in the British Government for Africa and Cameroon.

His Excellency Rowan Laxton, reported on the the new Trade Envoy of Britain to Cameroon, Jeffrey Donaldson as announced by the British Prime Minister Boris Johnson last month.Mr Jeffery Donaldson also conveyes a strong interest to visit Cameroon and to have a good orientation on how to best enhance the trade cooperation between both countries. Also on the list was the information on the  new Minister for Africa Vicky Ford who has equally expressed much interested in coming to Cameroon and has plans in the domains of Trade and  the welfare of the Cameroonian girl-child and the woman.

With regards to enriching both governments collaboration with the newly appointed staff, Minister Alamine Ousmane Mey, explained that the whole idea will be to seek the pillars of the National Strategy for Development 2021-2030 plan of the country for a greater efficiency and evaluation.

The audience was equally a time for the Minister of the Economy Planning and Regional Development to present the input of the  Financial Institutions of Cameroon  which he noted overall as satisfactory. He gave as examples the case of the Afriland First Bank that has aligned its plan of action in conformity with the National Development Strategy Paper2021-2030 and the World Bank that has been and is financing specific projects  in Cameroon and with whom Cameroon is working to address difficult  times.

The Minister of the Economy, appreciated Britains faithful cooperation with Cameroon and expressed interest in preparing for the visit of the  new team from Great Britain to Africa.