The New U.S Ambassador to Cameroon received at MINEPAT 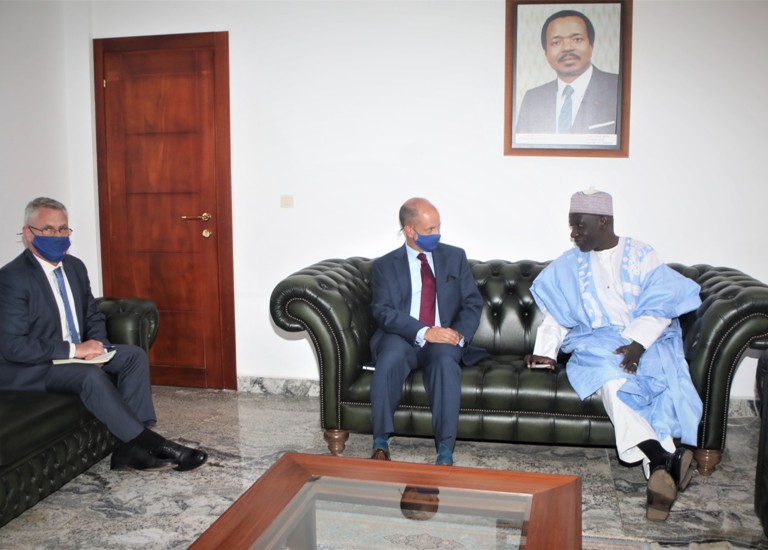 The New U.S Ambassador to Cameroon received at MINEPAT

H.E. Christopher J. Lamora was received in audience by the Minister of the Economy, Planning and Regional Development, Alamine Ousmane Mey on 8 April 2022.

Discussions during the audience centered on the state of cooperation between Cameroon and the United States of America. It was an opportunity for the Minister of the Economy, Planning and Regional Development to commend the United States for their support to Cameroon in many sectors; especially, in the health sector. Mr. Alamine Ousmane Mey also presented the four pillars of the National Development Strategy and updated the American Diplomat on how the Government is implementing its directives. He then highlighted the challenges of developing infrastructure and promoting industrialization to improve productivity. H.E Christopher J. Lamora affirmed that America is keen to fully accompany Cameroon in following the National Development Strategy and was working on seeing how more American companies could come and invest in Cameroon.

The U.S. Ambassador assured  the Minister of the Economy, Planning and Regional Development that the United States is really committed to partner with Cameroon. In response, MINEPAT reiterated the readiness of Cameroon in their cooperation. Speaking to the media after the audience, the new U.S. Ambassador to Cameroon said , “I think the relationship between Cameroon and US has enormous potential. There are areas where we have cooperated on, since when I was here the first time 30 years ago”. He also mentioned that the United States has worked very closely with Cameroon in the fight against terrorism in the Northern part of the country and is assisting in the health care area, such as during the Covid-19 pandemic and with the Cholera response right now.